Of the four broad swaths of intellectual property (patents, copyrights, trademarks, and trade secrets), the one that applies to this issue is copyright. Copyright protects expressions of creative ideas. Traditionally, copyright has been used to protect literature, music, art, that sort of thing.

Fast forward to the 21st century, and video games are now a thing. Video games are expressions of creative ideas (and yes, they are art), so video games are protected by copyright. When one looks at Candy Crush Saga on one hand and Bejeweled on the other, it would be reasonable for the average person to think, “uh, yeah, that’s the same thing, they copied it.” So why didn’t King violate Popcap’s copyright on Bejeweled?

Here’s where it gets a little unintuitive. Copyright protects the expressions of ideas, but it doesn’t protect the ideas themselves. This concept is called the idea-expression dichotomy, and it makes a distinction between an expression or manifestation of an idea and the underlying idea itself.

Popcap released Bejeweled back in 2001, when the earth was young and life was simple. King releases Candy Crush Saga in 2012, and it looks and plays an awful lot like Bejeweled. But both Bejeweled and Candy Crush Saga are simply two different expressions of the idea of a “match three things” game. In fact, Bejeweled is itself a new expression of the “match-three” idea behind Shariki, a DOS game released in 1994. So in this situation, unless King actually copied the particular expressions that Popcap used in their game (e.g., the artwork, background music, or sound effects), King is free to make their own expression of the idea of a “match three things” game. (Note: There are some instances where a court may find infringement beyond this kind of literal copying, but for simplicity’s sake I’ll reserve discussion of that topic for next time.)

Candy Crush Saga, Bejeweled, and Shariki: Three manifestations of the Platonic ideal of the match-three game.

Another concept that limits what copyright can and cannot protect is scènes à faire, which is French for a “scene that must be done.”  Scènes à faire refers to scenes, characters, or other elements that are pretty much necessary to tell a story of that genre. For example, a Western will have cowboys, a saloon, revolver duels at high noon, etc.; a science fiction story will have starships and space travel, aliens, energy weapons, etc.; a medieval fantasy story will have knights, kings and queens, wizards, dragons and other mystical creatures, etc.

One of the most famous instances of scènes à faire being applied to video games occurred in 1994 when Capcom sued Data East for allegedly copying Street Fighter II. (The case citation is Capcom U.S.A. Inc. v. Data East Corp., 1994 WL 1751482 (N.D. Cal. 1994) for all you law nerds out there.) Data East’s 1993 game, Fighter’s History, was a 2D one-on-one fighting game like the Street Fighter series. Capcom took issue with the many similarities between the two games: several characters had very similar appearances (e.g., Fighter’s History’s Matlok, Feilin, and Ray looked a lot like Street Fighter II’s Guile, Chun Li, and Ken), many special moves (and the controls to perform them) were nearly identical, and the overall presentation of many parts of the game were the same (e.g., the VS. screen, character selection, vitality bars, etc.). 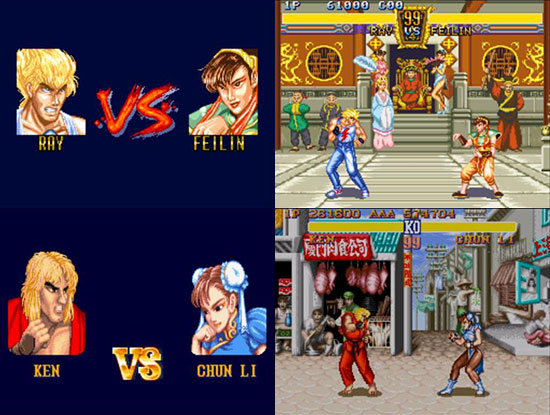 Two different expressions of the idea of “Blonde American man travels to China, attempts to punch Chinese woman in front of her countrymen”

The similarities between the two are glaringly obvious. In fact, the initial proposal for Fighter’s History was a nine page document with twenty-two separate references to Street Fighter II, so Data East all but admitted to getting “inspiration” from Capcom. However, as with the match-three games previously discussed, the question the court had to answer wasn’t just whether there were similarities between the two games, but whether those similarities crossed the line of infringing Capcom’s copyright on the protectible elements of Street Fighter II.

First, as far as the controls and button sequences for special moves, the court found that those weren’t protectible by copyright. When you have an eight-direction joystick and six attack buttons, there’s a fairly finite number of combinations you can assign to your special moves, especially when you’re trying to make those inputs somewhat intuitive (e.g., down-forward + punch makes a certain amount of sense, control-wise, when you’re trying to get your guy to shoot a fireball forward, out of his hands).

Regarding the characters, while there’s certainly parallels to be drawn between several of them, Data East’s argument was that Capcom’s characters were all just stereotypical representations of fighters. As such, for the genre of fighting games, character archetypes like “Japanese karate guy,” “Chinese kung-fu lady,” and “Angry blonde American martial arts master” are scènes à faire, and Capcom can’t lay claim to all representations of those types of characters. Therefore, Data East would have infringed on Capcom’s copyright on Street Fighter II if they had included a female Chinese martial artist named Chun Li with a blue dress and hair buns in their fighting game, but they weren’t infringing by including another female Chinese martial artist named Liu Feilin.

The UI elements, like the life-bar at the top of the screen, fall under the category of non-protectible scènes à faire as well. There are only so many different ways to visually convey the concept of “a finite amount of vitality that gets reduced when the character is hit,” so we can’t expect Capcom to be able to stop other companies from using the concept of a “life bar” in any other fighting game. And even if they tried, Nintendo might like to have a word with them regarding Punch Out!!, which came out in 1984. 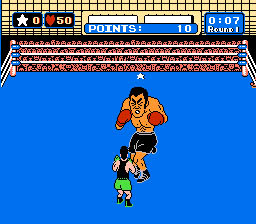 Mike Tyson’s Punch Out!!: Pioneering the use of life bars and blatant racial stereotypes in fighting games.

This sort of thing happens in other forms of media all the time. Friends with Benefits and No Strings Attached were arguably damn near the same movie. But unless one movie straight up used the script of the other, they’re both allowed to express the idea of “guy and girl agree to casual sex without emotional attachment but then of course they fall in love by the end of the story.” An argument could be (and has been) made for other things, like Antz and A Bug’s Life, or Babylon 5 and Deep Space Nine. They’re different enough, but people have compared them for starting off with roughly the same idea (reluctant crew of a space station working towards peace between hostile races, a self-aware talking ant struggles with the concept of individuality, etc.).

For what it’s worth, at least Candy Crush Saga added some new elements to the traditional “match-three” game. For example, the unique effects of the bonus candy that appear for matching 4 or 5 things, the interactions between those bonus effects when combined, and environmental hazards like the goddamn chocolate that won’t stop getting in my damn way. None of those mechanics were in the original Bejeweled.

Fighter’s History introduced a “weak point” mechanic to the fighting game genre, wherein each character had a specific weak spot (i.e., head, chest, etc.), and if the opponent scored a series of hits on that particular spot, the character could be stunned once a round.

It certainly sucks when a company pretty much copies all of the game mechanics of another game verbatim and adds nothing new. But that’s an unfortunate consequence of not allowing game mechanics to be protected, and in order for video games to continue to evolve, we definitely don’t want companies to be able to protect every new game mechanic. Otherwise, the first time any new idea showed up in a game, no other game could use it, and the medium as a whole would stagnate.

Game developers “recycle” each others’ ideas all the time, and it’s a fairly integral part of the continued growth and evolution of the video game medium for game devs to use existing ideas and improve upon them.

2 thoughts on “Candy Crush Saga, Bejeweled, and Why Game Clones Are a Thing”