(If you’re a fan of both comic books and the law, you might already be aware of the fantastic law blog Law and the Multiverse. I wrote a guest post over there to answer a reader question that happened to fall within my wheelhouse: video games.)

Since the release of Tomb Raider in 1996, millions of people have been happily raiding tombs as intrepid archaeologist Lara Croft; however, back in April of last year, Mark asked: how legal is anything Lara Croft does? (Note: Since I am a U.S. attorney, this analysis will be based on prevailing U.S. law. Ms. Croft’s fate in the courts of her home country of England is best left to experts across the pond.)

The single most significant law affecting Ms. Croft’s globe-spanning archaeological pursuits is the UNESCO 1970 Convention on the Means of Prohibiting and Preventing the Illicit Import, Export and Transfer of Ownership of Cultural Property. The UNESCO 1970 Convention was drafted to combat the illicit trafficking of cultural artifacts by giving member nations the right to recover stolen or illegally exported antiquities from other member countries.

At the time of this writing, 124 nations are signatories to the treaty, including almost every nation that Lara Croft has visited during her various adventures (except for Tibet and Thailand). The United States ratified the UNESCO 1970 Convention and implemented it with the Convention on Cultural Property Implementation Act (CIPA), codified in 19 U.S.C. §§ 2601-13.

Ms. Croft has certainly had an eventful career.

That being said, the UNESCO 1970 Convention and CIPA only come into play if the items in question were in fact 1) cultural artifacts, and 2) stolen or illegally exported. While UNESCO provides model provisions regarding state ownership of cultural objects, such model provisions are not themselves legally binding, and it is up to each member nation to implement laws concerning the ownership and exportation of cultural artifacts.

The Raiding of Foreign Tombs

Whether Lara Croft could face liability for the actual act of “raiding” would depend upon the local laws governing the tombs in question. The games are notably silent as to Lara having the proper permits to conduct her excavations, but it seems safe to assume that her tomb raiding is being done without the permission of the local governments and would almost certainly subject her to civil and/or criminal liability. (To be fair to the game developers, a cutscene or level wherein Lara visits a Peruvian government building to file for permits might not have made for the most exciting game.)

The question of whether or not Lara’s tomb raiding are illegal in the countries in which the tomb raiding is rather straightforward – the answer is almost certainly yes, as in each case she goes in without government sanction, guns blazing, often resulting in the complete destruction of the tomb in question.

For example, in Egypt, Article 6 of Law 117 states that “[a]ll antiquities are considered to be public property . . . It is impermissible to own, possess or dispose of antiquities except pursuant to the conditions set forth in this law and its implementing regulations.” Furthermore, Article 41 states that anyone who “unlawfully smuggles an antiquity outside the Republic or participates in such an act shall be liable to a prison term with hard labor and a fine of not less than 5,000 and not more than 50,000 pounds.” There are prison terms and fines outlined for removing an antiquity from its place, for transporting it outside of Egypt without express government permission, and for defacing artifacts and monuments, all of which Lara does during her brief time in Egypt looking for the final piece of the Scion in the first Tomb Raider game.

Rather than list off the innumerable fines and jail terms Lara would no doubt face in the various nations from which she retrieves artifacts, instead I will examine the legal consequences Lara may face after her adventures are concluded and she brings these artifacts home to hang up on her wall. (Lara Croft’s official home is in England; however, as previously stated, I will be analyzing her situation in the context of U.S. law. I would welcome a British lawyer’s perspective on how Lara would fare over there.)

In the U.S., a person may be subject to both civil and criminal liability for the sale and transport of illegally exported cultural artifacts. While Lara doesn’t ever actually sell any of the artifacts she finds, the fact remains that she is transporting all of these artifacts across state/national borders all the time, with many of them winding up in her personal collection at home. (For example, she has the Ark of the Covenant just sitting in the main hall of her mansion.) 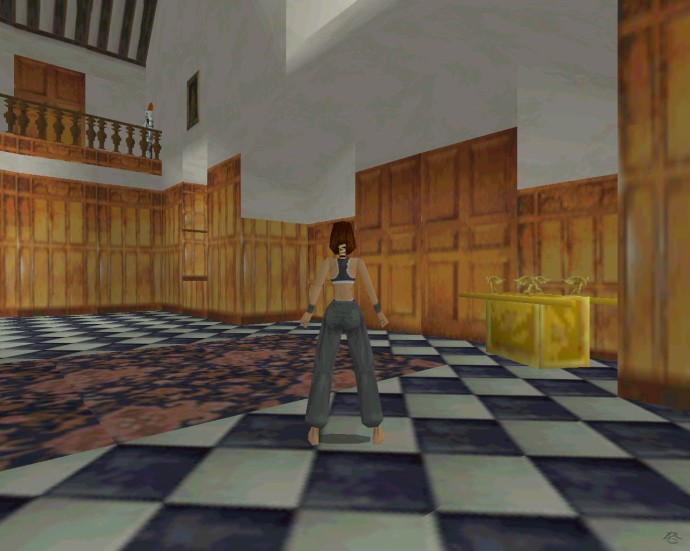 Is the Ark of the Covenant maybe the kind of thing that belongs in a museum, rather than someone’s foyer?

The National Stolen Property Act (NSPA) prohibits the transportation “in interstate or foreign commerce [of] any goods, . . . of the value of $5,000 or more,” with knowledge that such goods were “stolen, converted or taken by fraud.” 18 U.S.C. § 2314. Enacted in 1948, the NSPA was originally intended to aid states in their pursuit of thieves, as the states’ ability to prosecute thieves was often limited when the thieves (or the property) would cross state lines.

However, in addition to interstate commerce, the NSPA also specifically mentions foreign commerce, and as a result it has been applied to the illegal import of artifacts stolen from foreign nations. In United States v. McClain, the defendant was prosecuted under the NSPA for illegally importing several pre-Columbian artifacts from Mexico.

On appeal, the defense argued that that the NSPA could only be applied if the artifacts were “stolen” as defined by the NSPA, and that the term “stolen” only covers “acts which result in the wrongful deprivation of rights of ‘ownership’ as that term is understood at common law. United States v. McClain, 545 F.2d 988, 994 (5th Cir. 1977). In other words, he couldn’t have stolen them if they weren’t officially owned by anyone.

The court reasoned that an explicit declaration of ownership by the government would be sufficient to consider the illegally exported artifacts “stolen” under the NSPA. (Without such an explicit declaration of ownership, prosecuting people in the U.S. for illegally exporting artifacts from foreign nations would simply amount to the United States enforcing the laws of other nations for them.)

While the respondents argued that Mexico had passed laws protecting their archaeological interests dating back to 1897, the court did not find a law specifically declaring ownership over the type of artifacts in question until 1972, when Mexico passed the Federal Law on Archaeological, Artistic and Historic Monuments and Zones. 312 Diario Oficial 16, 6 de mayo de 1972. Article 27 states that “[a]rchaeological monuments, movables and immovables, are the inalienable and imprescriptible property of the Nation.”

Because court could only establish that Mexico had officially declared its ownership interest over the artifacts in 1972, and it could not be established precisely when the defendant had exported the artifacts, the defendant was eventually acquitted of all but the conspiracy charges.

The McCain decision was cited 25 years later, in Unites States v. Schultz, 333 F.3d 393 (2003), in which the defendant was also prosecuted under the NSPA for the receipt of stolen Egyptian antiquities. In Schultz, the court looked to a law passed in Egypt (“Law 117”) that declared all antiquities found in Egypt after 1983 to be the property of the Egyptian government, and upheld the defendant’s conviction. Schultz was sentenced to 33 months in prison and a fine of $50,000, and nearly all of the artifacts he received were returned to Egypt.

On top of all the possible fines and jail time Lara Croft would likely face in each nation she visits in her tomb-raiding adventures, for each artifact she brings home she may also be prosecuted by the U.S. government for the transport of stolen goods under the National Stolen Property Act as long as the artifact’s nation of origin has enacted a law officially declaring state ownership of such artifacts. Furthermore, all of the various artifacts she retrieves will likely be returned to their nations of origin under the UNESCO 1970 Convention and CIPA. Well, for her sake hopefully Lara didn’t bring home THAT many arti… oh.

This analysis was focused specifically on the legal ramifications of the act of retrieving and transporting the artifacts central to the Tomb Raider games. In the course of the first game alone, Lara Croft also breaks into the corporate headquarters of Natla Technologies, kills a number of endangered animals (like wolves and gorillas, not to mention the sasquatch and dinosaurs), and also straight up shoots a guy without (much) provocation.

How legal is anything Lara Croft does? The short answer is, “Not very.”

One thought on “Lara Croft: Tomb Raiding and the Law”